My grandchildren love these And these laces will go in their Easter baskets!

I’ve been running with the reflective laces since they came out, and they’ve quickly become my new favorites! Not only is there a fun dash of color in the laces we already know and love, but they’re perfect for extra visibility in the early mornings or after work!🙌🏼 I love that I can “set it and forget it” when it comes to getting the perfect fit with my laces. 10/10! 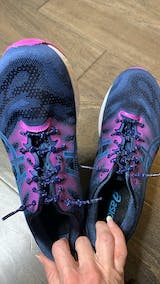 W
W.
I Rather Buy the Originals

I have had about a dozen pairs of the Original Caterpy Laces and I love them. I use them in all of my shoes and they have been great for running and OCR events. I got a two pairs of the Reflective Caterpy laces and even though I liked the look of them, I was not impressed with the lace length. On top of that, they came in two different lengths. I reached out to Caterpy through Facebook and they told me they would look into it and I never heard back from them. I will still continue to buy Caterpy laces, but I will only buy the Original Caterpy lases and not the Reflective ones due to their length. If Caterpy would change the length of the reflective laces to the Original length, I would buy them again.

Thank you for your review. We have good news for you though! We will be updating the lengths for the reflective laces to the 30'' style a little later this year. The initial batch was a test run for length since this is the way our sister company in Japan sells them. We really appreciate your love for our laces though and thanks for the feedback. It helps us continue to improve!

J
J.
Are You Ready For The Shine?!

Allow me to begin by saying I'm not usually the type of person that would buy multiple pairs of laces, but after a stimulus check, buying some original Furby dolls, (and some change leftover for stocks at some company called Gamestop), I figured I would spruce up some pairs of shoes I wear to run, wear to the gym, and to work. And oh man, do I wish that those Furbies were returnable so I could spend more money on a much smarter investment...and no, it isn't more stocks at Gamestop or Dogecoin. I'm talking about Caterpy Shiny Laces (as well as some new kicks to decorate them with).

I've always been skeptical of the idea of "magic", but I can confirm that these laces can turn anyone into a believer. I laced up my first pair of shoes, a pair of Brooks Anthems, and I could hear neighbors from a few blocks away saying they keep seeing a beautiful and shimmering glow in the distance. Even after placing the shoes in my gym bag for the next day, my neighbors were questioning if I had a nuclear reactor contained within my home from how bright these things are. I felt a bit daring one evening and wore shoes with these laces out on a date. The server, the restaurant staff, and other restaurant patrons were in such awe by their beauty that the restaurant gave were generous enough to give us our meals (as well as appetizers, a round of drinks, AND dessert) on the house. Our server, as well as the maître d, were insistent that we take home an extra meal for a midnight snack. Other diners looked on in envy and amazement at the sheer magnificence of these laces that almost all of them approached me at some point in the evening to ask where they can obtain a set or two for themselves.

They're also great for running at night and working out in low-light settings. It's also good that they come shorter than the original Caterpy laces, so I didn't have to cut down or wrap them multiple times, and I can just do a simple tuck and keep the laces intact. I've also recommended them to other runners and athletes, as well as healthcare workers and people who have difficulty (or don't feel like) tying their shoes. Great price. Completely recommend!

The reflective laces are amazing during night runs.